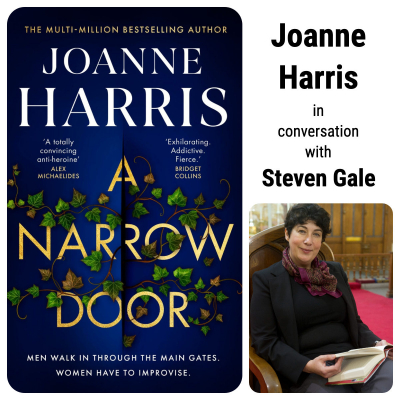 Join the bestselling author of Chocolat as she talks to Steven Gale about her latest book A Narrow Door, the final in a trio of psychological novels set in a grammar school, in which the reader is led into a dark world of emotional complexity and betrayal, and nothing is what it seems.

Joanne has written many much-loved novels, plus novellas, short stories, game scripts, the libretti for two short operas, several screenplays, a musical and three cookbooks. Also a wonderful guide for would-be writers, Ten Things about Writing. Her books are published in over 50 countries and have won many awards. She has been a judge for the Whitbread Prize, the Orange Prize, the Desmond Elliott Prize, the Betty Trask Award, the Prima Donna Prize and the Royal Society Winton Prize for Science.