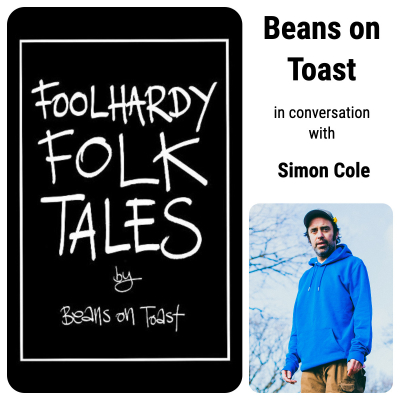 Folk songwriter Beans on Toast has written his second book! Foolhardy Folk Tales will follow in the footsteps of his warmly received debut outing, 2018’s Drunk Folk Stories, as the singer shares 10 more capers from a life less ordinary. A mix of memoirs, mischief and moral tales from a modern-day folk legend, the new book finds Beans venturing back into the past to 'try and throw up some fun stories, lessons learned, or bridges burned'. He talks to urban philosopher Simon Cole. Followed by a 45-minute set of new tunes and old favourites.

Singing simple songs about complicated subjects, Beans on Toast has established himself as an accomplished songwriter and an unmissable live performer. Having released an album every year since 2009, Beans went one better in 2020 with the release of two new records: ‘Knee Deep in Nostalgia’ (produced by Frank Turner) and ‘The Unforeseeable Future’. Always writing, recording and touring (when he can), expect new material, festivals, shows and more...

Simon Cole is a sustainable travel innovator, cultural entrepreneur, alternative tour guide, a writer, performer and community arts thought-provocateur. He is the founder of Hackney Tours and Half-Day Holidays.