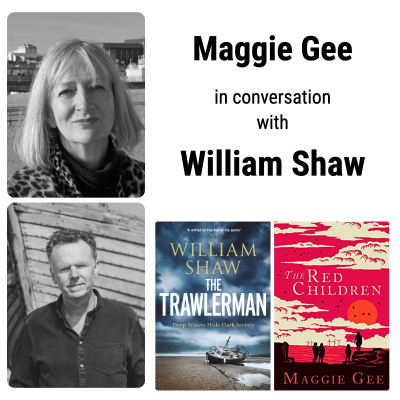 William Shaw’s taut thrilller 'The Trawlerman', set in the brooding shadows of Dungeness, and Maggie Gee’s literary eco-fiction set in 2030s Ramsgate – the authors talk about Kent as the setting for their work and how they each confront its social divisions and growing social unrest set against the backdrop of the brooding waters of the Kent coastline.

William Shaw's 'The Birdwatcher', set in Kent and Northern Ireland, was longlisted for the Theakston’s Old Peculier Crime Novel of the Year and hailed as 'a contender for thriller of the year' in The Sun. His books have also been nominated for a Barry Award, the Golden Bullet, and the CWA Historical Dagger. Other novels include 'Grave's End', 'Deadland', 'Salt Lane', 'A Song from Dead Lips', 'A House of Knives', 'A Book of Scars' and 'Sympathy for the Devil'. He has worked as a journalist for over twenty years.

Maggie Gee OBE is a novelist and Professor of Creative Writing at Bath Spa University. Her many published works include 'Blood', 'Virginia Woolf in Manhattan', 'The Ice People', 'My Cleaner', 'The White Family', shortlisted for the Orange Prize, and a writer’s memoir, 'My Animal Life' (2010). In 2012 she was awarded an OBE for services to literature.