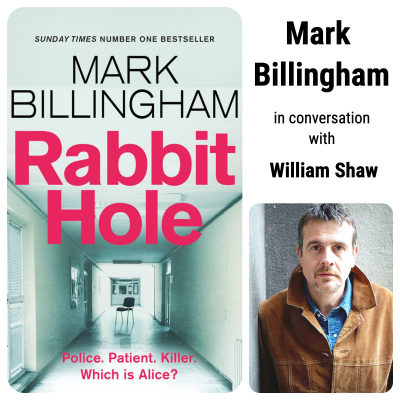 William Shaw talks to best-selling crime fiction writer Mark Billingham about his new thriller, Rabbit Hole. Mark Billingham started his career 20 years ago as the new young voice in crime fiction. He brought a fresh, edgy and terrifying twist to the genre and Tom Thorne was every bit as quirky and different a character as his creator. The intervening two decades have seen Billingham grow from a young maverick, pushing the boundaries and challenging the assumptions of crime writing, supporting new writers and confronting his own social conscience through his work. The crime novel can (in the words of Billingham himself) ‘shine a light into some of the darker corners of society’ – and the commentary writers like him give to contemporary political and social issues has an important role to play in today’s tumultuous world.

Mark’s writing career spans 20 years and his books have sold over 6 million copies. He has had 20 Sunday Times bestsellers (every one of his titles) and has spent over 120 weeks in the top ten.

He began his career as an actor, his credits including TV greats such as Dempsey & Makepeace, Birds of a Feather and Juliet Bravo. For more than 20 years he toured the world doing stand-up comedy, as well as on screen with Spitting Image, The Mary Whitehouse Experience and Live At Jongleurs. He has presented widely on TV and radio; and was the winner of Celebrity Mastermind, thanks to knowing just about everything on Elvis Costello.

William Shaw's 'The Birdwatcher', set in Kent and Northern Ireland, was longlisted for the Theakston’s Old Peculier Crime Novel of the Year. His books have also been nominated for a Barry Award, the Golden Bullet, and the CWA Historical Dagger. He has worked as a journalist for over twenty years.