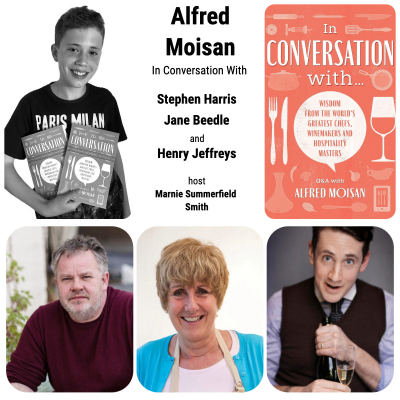 Top foodies from around the world shared their secrets with Kent-based 12-year-old aspiring chef Alfred Moisan, collected together in his book In Conversation With... Wisdom From the World's Greatest Chefs, and which in its first week of publication outsold Mary Berry, Jamie Oliver and Gordon Ramsay! Alfred talks about his project and all things foodie with Stephen Harris from the Michelin-starred The Sportsman in Whitstable; and Faversham-based Jane Beedle (Great British Bake Off finalist in 2016) and Henry Jeffreys (The Cocktail Dictionary). With host Marnie Summerfield Smith.

For every sale, 100% of the profits of Alfred's book will go to FareShare, the UK’s largest charity fighting hunger and tackling food waste. A donation from ticket sales for this event will be given to FineFare.