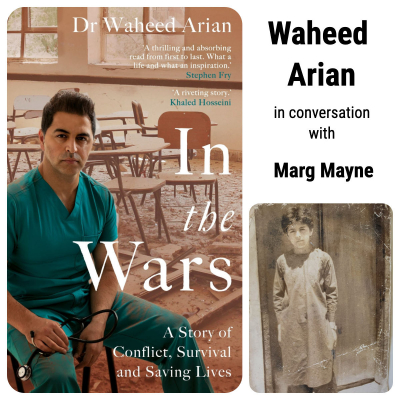 Born in war-torn Afghanistan, Waheed Arian's memoir recounts how he was smuggled to the UK at age 15 with just 100 dollars in his pocket. He found a job in a shop and was advised to set his sights on becoming a taxi driver. But he had bigger ambitions – he was accepted to read medicine at Cambridge University, Imperial College and Harvard, and went on to become a doctor in the NHS, currently in A&E on the Covid frontline. In 2015 he founded Arian Teleheal, a pioneering global charity that connects doctors in war zones and low-resource countries with their counterparts in the US, UK, Europe and Australia. He is in conversation with Faversham-based Marg Mayne, former CEO of Voluntary Services Overseas (VSO) and former director at the British Council.

A donation from this event will be made to the Faversham and Villages Refugee Solidarity Group.

'A powerful, heart-warming account... I was moved and delighted.' JOHN SIMPSON