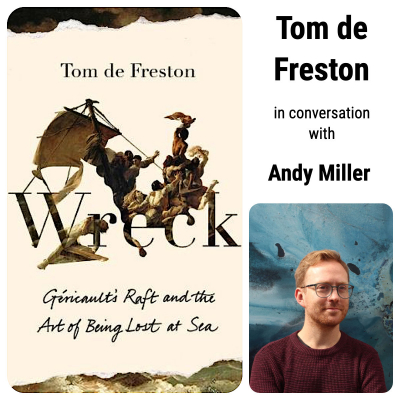 An intriguing combination of memoir, history and reflections on art, Andy Miller talks to artist Tom de Freston about his obsession with a painting by Gericault, the troubling story behind its creation – a 19th-century tragedy in which 150 people were drowned on a raft lost in a stormy sea – and Tom's experience of making an artwork with a Syrian writer blinded by a bombing.

'I've never read a book like Wreck before. It pulled me in, engulfed me' – Robert MacFarlane

'Stupendous ... de Freston evokes a provocative new voyage for the rotting raft which holds a mortal but undying resonance for our own times' – Philip Hoare

Andy Miller is the author of The Year of Reading Dangerously: How Fifty Great Books Saved My Life. He is one of the presenters of Backlisted Podcast and he lives in Whitstable.