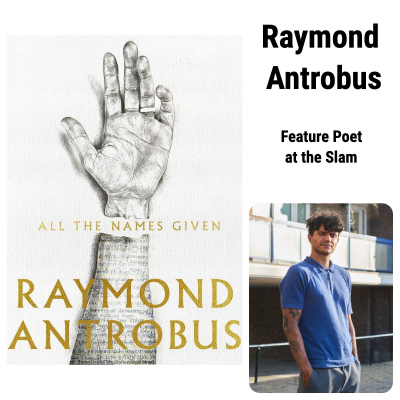 One of the most important poets of his generation, Raymond Antrobus is our headline poet to kick off the Bookie Slam as it hits the road and returns to Faversham Literary Festival! Host: Connor Sansby.

Raymond Antrobus won the Ted Hughes Award in 2019. His writing confronts his deafness discovered when he was six years old; miscommunication, place and memory, intimacy and brutality, sound and silence, and conflicting racial and cultural identities, shifting between England, South Africa, Jamaica, and the American South. He is the author of 'Shapes & Disfigurements' (2012) 'To Sweeten Bitter' (2017), 'The Perseverance' (2018) and ‘All The Names Given’ (2021). In 2019 he became the first poet to be awarded the Rathbone Folio Prize for best work of literature in any genre. He has won numerous Poetry Slams and was Sunday Times Young Writer of the Year in 2019.

Followed by 10 poets battling it out to be crowned the Bookie Champ and get their shot at the Kentish Poetry Championship Belt and £50/£25 Prize Money for the 1st and 2nd Place:
Each poet has 3 minutes for their performance
- Time starts as soon as they're in position on the stage.
- For every ten seconds over, 1 point will be deducted from their total.
- 3 judges will be raffled from the audience at the start of the show.