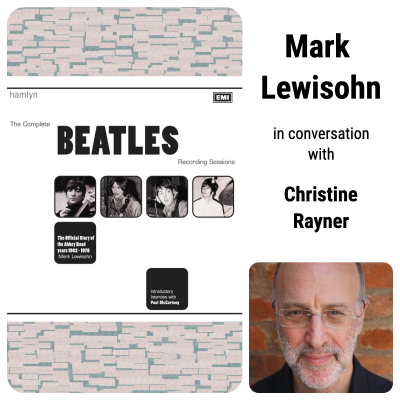 So many would-be successors have come and gone, there’s now an acceptance that no one is ever going to be more successful than the Beatles or make a greater contribution to the culture not just of Britain but the entire world. John Lennon, Paul McCartney, George Harrison and Ringo Starr hold on strong, universally acknowledged as a great artistic force, still somehow current and woven into the fabric of everyday life – the four lads who pumped the heart of the decade that also won’t shut up, the 1960s.

Acknowledged as the subject’s world authority, Mark Lewisohn is a Faversham-based author who lives and breathes the Beatles and loves talking about them. He’s the writer of several acclaimed books, including The Complete Beatles Recording Sessions (1988, recently republished); The Beatles’ London (1994, 2008); and Tune In (2013) – winner of the inaugural Penderyn Prize and the first in an ambitious and comprehensive three-volume history, The Beatles: All These Years. He will be talking to local journalist Christine Rayner.